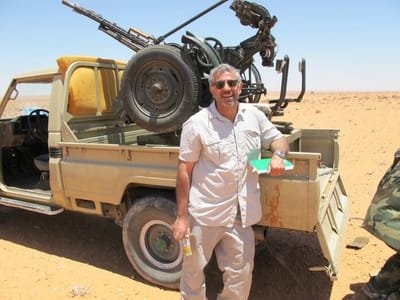 I am an experienced foreign correspondent covering the greater Middle East , North Africa, and Europe -- including Iran, Afghanistan, and Turkey -- for English-language news organizations. My geographical areas of speciality include Iran, Iraq, Turkey, Egypt, Syria, Lebanon, the Arabian Peninsula states,  and North Africa, including Libya and Tunisia. I write about war, politics, economy, and culture.

I am an Istanbul-based international correspondent for The Independent, the UK-based newspaper. I am also a Senior Non-Resident Fellow at the Scowcroft Center for Strategy at the Atlantic Council, a Washington, DC think tank.

I am a three-time finalist for the Pulitzer Prize in International Reporting for coverage of Iraq and Iran.

I contribute  to Foreign Policy, The Atlantic, and The Daily Beast, and am a frequent commentator and reporter on English-language radio and television in North America and Europe, including France 24 and PBS Newshour as well as public radio outlets like CBC, KCRW, and PRI's The World.

I have worked for the Los Angeles Times, Financial Times, BuzzFeed News, and Associated Press.

My work has appeared in US publications including The New York Times, San Francisco Chronicle, Boston Globe, the Newark Star-Ledger, and the Pittsburgh Post-Gazette, and worldwide in The Guardian, The National (UAE), South China Morning Post, the Toronto Globe & Mail, the Singapore Straits Times, the Times of London, and the Independent (UK).

I have been a guest speaker at universities, and have also taught journalism to college students. I am a member of the Overseas Press Club of America.